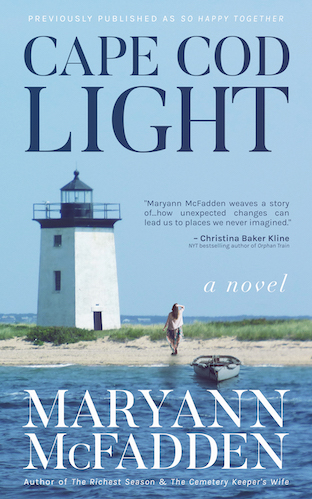 In SO HAPPY TOGETHER, Maryann McFadden deftly weaves a story of three generations of women and the men who orbit around them. Set on Cape Cod.
Purchase Paperback at Indie BoundPurchase at Paperback at Amazon

(formerly titled SO HAPPY TOGETHER)

Claire Noble gave up on her dreams a long time ago. A single mother and respected history teacher, she has also been caring for her aging parents. But now it’s finally Claire’s turn. She has fallen in love with Rick Saunders, who is offering her both security and the opportunity to travel. Before their fall wedding, she will be leaving for a summer on Cape Cod, where the fabled light has been luring artists for a century; and the chance of a lifetime to study with one of the most noted photographers in the country.

But just as Claire is about to step into her new life, her estranged daughter suddenly shows up with a backpack full of problems. Claire’s father reveals a fifty-year-old secret that threatens to unravel their family. Her mother confides that at seventy-eight years old, she’s still waiting for the love of her life. And a chance encounter with an environmental writer results in an intriguing new relationship, undermining Claire’s certainty that she’s found the man with whom she hopes to spend the rest of her life. In the midst of all this turbulence, Claire begins to question everything she thought she wanted. And surprisingly, so do her mother and her daughter.

Set in the lush, rolling hills of northern New Jersey and the romantic, windswept dunes of Cape Cod, CAPE COD LIGHT is the story of three generations of women who find their lives, and dreams, suddenly transformed in ways they never could have imagined. But ultimately, it is the heartbreaking and joyful journey of one woman who comes to realize that when you’re a mother, or a daughter, you are never truly free.

“I can think of no writer I’d rather have sing me songs of the sea, even sad ones, than Maryann McFadden. The characters in CAPE COD LIGHT will speak to you, and the best ones . . . all have the ocean in their voices.”
–Anne Rivers Siddons, author of Off Season and Colony

“In CAPE COD LIGHT, Maryann McFadden deftly weaves a story of three generations of women and the men who orbit around them. With a sure touch, she writes about the mother-daughter bond, the simple pleasures to be found in cooking, the pervasive nature of guilt, and the power of forgiveness.”
–Christina Baker Kline, NY Times Bestselling Author of Orphan Train

“CAPE COD LIGHT is an honest book . . . that will resonate with many women who struggle to care for family members and themselves.”
—The News & Observer (Raleigh, North Carolina)