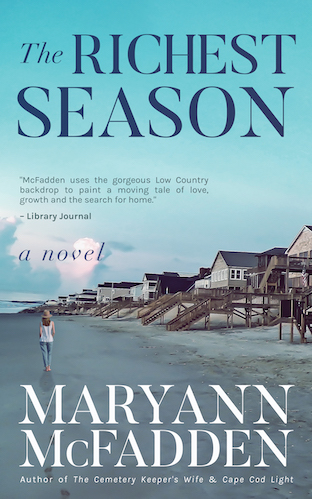 Sometimes you have to leave your life to find yourself again . . .After more than a dozen moves in twenty-five years of marriage, Joanna Harrison is lonely and tired of being a corporate wife. Her children are grown and gone, her husband is more married to his job than to her, and now they’re about to pack up once more. Panicked at the thought of having to start all over again, Joanna commits the first irresponsible act of her life. She runs away to Pawleys Island, South Carolina, a place she’s been to just once.

She finds a job as a live-in companion to Grace Finelli, a widow who has come to the island to fulfill a girlhood dream. Together the two women embark on the most difficult journey of their lives: Joanna struggling for independence, roots, and a future of her own, as her family tugs at her from afar; and Grace, choosing to live the remainder of her life for herself alone, knowing she may never see her children again.

Entwined is Paul Harrison’s story as he loses his wife, his job, and everything that defines him as a man. He takes off on his own journey out west, searching for the answers to all that has gone wrong in his life. One thing remains constant: He wants his wife back.

Joanna, however, is moving farther away from her old life as she joins a group dedicated to rescuing endangered loggerhead turtles, led by a charismatic fisherman unlike anyone she’s ever met.

The Richest Season is a stunning debut about three very different people, each changing their lives when such transformations are usually long over. It will resonate with any woman who’s ever fantasized about leaving home to find herself.

A quirky charm takes the place of easy answers in this midlife tear-up, originally self-published by debut author McFadden. A neglected corporate wife for 25 years, Joanna Harrison rebels when husband Paul receives yet another move-necessitating promotion. Before they go, with her children grown, Joanna gets in her car and leaves their upscale Jersey digs. Ending up at Pawley’s Island, S.C., Joanna meets Grace, an elderly artist who has a house on the ocean and needs a live-in companion. A floundering Paul heads to Pawley Island to try to woo Joanna back, but soon has further crises to face. Skillful plotting keeps pages turning, and McFadden quickly has readers rooting for intriguing Joanna, on the cusp of change. (June)

“In Maryann McFadden’s brave and carefully made novel, The Richest Season, two women set out on open-ended odysseys, one to find her life, one to find meaning in her death. Lonely Joanna gives up all she knows for a single chance at all she needs. When they meet, Grace relinquishes her aloof solitude to embrace life at its end, banking on the borrowed courage of a stranger. McFadden is out of the gate and on her way.”
–Jacquelyn Mitchard, author of The Deep End of the Ocean and Still Summer”

Set in the fabled landscape of South Carolina’s Low Country, The Richest Season takes us on a heartrending journey of discovery. Maryann McFadden is an exciting new author who writes with compassion, wisdom, and astonishing skill.”
–Cassandra King, author of Queen of Broken Hearts and The Same Sweet Girls”

The Richest Season is filled with so much honesty and searching and struggle involving three characters whom I grew to love, that I hated to come to the end.”
–Paulette Bates Alden, author of Crossing the Moon and Feeding the Eagles